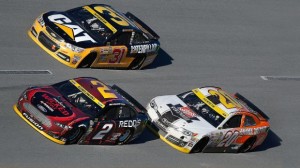 FORD – Ford won seven races and the 2003 NASCAR championship, as led by Matt Kenseth. Kurt Busch led all Ford drivers in 2003 with four victories. Beginning with Jimmy Florian’s first win in 1950, the total victories by the Ford team leads all Cup manufacturers with 546.

DODGE – The Dodge team was led by Ryan Newman in 2003 with eight wins and 11 pole positions. Bill Elliott also won at Rockingham. Starting with Lee Petty’s win in 1953, Dodge has a total of 179 Cup victories.

CHEVROLET – Chevy has 532 cup victories – second only to the Ford team. Jimmie Johnson and Jeff Gordon are the most prominent of recent Chevy drivers. Since Pontiac dropped out after 2003, more teams will be running the Chevy banner.